As some of you may have read in the news: Lesotho is in fact in a period of turmoil and unrest. It doesn’t come as a surprise to someone living here as local analysts have been predicting dire instability since June for reasons I’ll explain in this post. I chose to not write about the political climate in previous entries in the hope that it would get resolved before any type of escalation occurred. Unfortunately that wasn’t the case and it couldn’t have come at worst time in my service. Of course my personal work pales in comparison to what’s at stake for the nation.

As soon as I accepted my invite to Lesotho back in February of 2013, I immediately began researching the geopolitical workings of the Southern Africa region. Just like anywhere else in the world it’s ripe with complexity which requires a historical perspective to truly gauge the current climate. Without delving too much into it, I think it’s important to understand that political instability is a tell-tale sign of a developing nation. Lesotho has a long history of coups and political upheavals with a majority of them being peaceful in nature. Most of them were born not in a lust for power, but rather to remove oppressively corrupt leaders.

I’ve often mentioned in this blog how the Basotho are an incredibly peaceful culture. The nation was literally founded on a single leader (Moshoeshoe) unifying multiple Sotho tribes; not through battle or conquest, but rather peace. As such, the Basotho have always held their peaceful nature as a source of pride. It’s a cultural perspective like nothing I’ve ever seen or experienced. That’s why it’s incredibly painful to see massively corrupt government entities acting beyond the will of the people.

The current unrest is a result of a few key players budding heads. In 2012 the government held elections which went on without a hitch. For the first time in the country’s history, a coalition government was formed by 3 main parties. This was a big step forward for democracy in the nation and the world was quick to pat Lesotho on the back for creating a multi-party ruling government. However, it didn’t take long for the pieces to unravel. The military (Lesotho Defence Force) is led by a man named Lieutenant General Tlali Kamoli. The LDF is loosely regulated and this unchecked atmosphere allows them to operate almost independently from the government; essentially becoming the law unto themselves. General Kamoli aligned himself with one of three parties as well as the Deputy Prime Minister, Mothetjoa Metsing. In recent months, the parties have accused Prime Minister, Tom Thabane, of making backdoor deals without consent of the parliament. These accusations of abuse of power upon Thabane prompted parliament to form a plan to oust him constitutionally by enacting a vote of no-confidence. Worried by this prospect, Thabane suspended parliament for 9 months in June.

This move would be akin to the president suspending Congress to avoid impeachment. Obviously this didn’t sit well parliament and factions began to form, further leading to unrest. It all came to a boil on Friday, August 29th when PM Thabane dismissed General Komoli and appointed a new Lieutenant General to command the military. The PM’s rational for this was based around accusations of corruption in the arena of hundreds of thousands of dollars. Komoli could not be prosecuted for his alleged crimes if he remained commander of the military, so instead of accepting dismissal and facing trial, he instead staged an attempted coup. PM Thabane learned of the impending coup and sought refuge in South Africa hours before the military showed up at his state house. The new lieutenant general he appointed was also paid a visit by Komoli’s forces who shot up his house for 30 minutes before learning he also skipped town. In total, 130 high level government politicians and workers fled to South Africa by the following day. The military raided 2 police stations in Maseru, removing all weapons and uniforms from the police. The commander of the police was aligned with the Prime Minister, so Komoli saw them as a threat. As a result, police forces throughout the country abandoned their positions and went into hiding, including in my town of Thaba Tseka.

Without police on the streets, one would think rioting and looting would take erupt in places without a military presence. However that wasn’t the case. The country continued on as if nothing had happened in the capital. This is a testament to the nature of the Basotho. I can only imagine what would happen in a major city like Chicago if every police officer suddenly vanished for a week. Chaos and anarchy would certainly ensue.

On September 22nd, Peace Corps Washington HQ deemed the security situation in Lesotho safe enough for volunteers to return. This was primarily based on the knowledge that the police had returned to their posts and maintained a presence of order in the villages throughout the country.  I arrived safely back in Thaba Tseka on the 23rd. My friends and colleagues were bewildered at my unannounced absence for 3 weeks. As part of the consolidation protocols, we were advised to not inform anyone of our whereabouts. So you could imagine their surprise upon my arrival. It felt great to be back. My cat Motse was stuck inside (with plenty of food and water) for 3 weeks and could be more joyous for my return. I resumed playing with Little Roses FC and continued my other projects for TTHS and Matheko. I’m currently trying to secure some funding to start a HIV educational movie screening project which will mark the first time in over a year I will have a chance to work with my host organization.

Prior to service, one of the prospects that intrigued me was the chance to get out of the “bubble” of America and take an external view of the country in the contrast of an entirely different culture. Back in January of this year I caught an article on allafrica.com that noted Ebola had reappeared in West Africa and there was a significant outbreak potential in the region. I decided to do some further research on the deadly virus and found it to be very similar to HIV in that it can only be transferred from human to human via bodily fluids. The only difference is how one virus immediately attacks the system while the other lays dormant for some time, slowly reducing the CD4+ T-cell count until becoming AIDS.

My revulsion for mainstream media and American politics doesn’t leave much room for objectivity in regards to assessing said institutions from abroad. Regardless, it’s rather evident that fear-mongering dominates the 24/7 news cycle of Western civilization. Whether it’s xenophobic reporting of a tiny fraction of Islamic cultures, isolated violence spun into racial controversies, or a virus affecting 0.000001% of the world’s population (8,000÷6.7b), there always seems to be a looming catastrophe on the horizon to report on. This method retains the most viewership and therefore is the most viable economic model to deliver content to the public. Furthermore, it only gets worse when you add political bias and motives within these “news” networks. Politicians and pundits only add to the fervor by making inflammatory remarks with much conviction about the other side which increases the polarity within American society. Perhaps the most disheartening aspect of this counterproductive combination is how amidst all the banter, facts are lost. Science takes a backseat to diatribes and the result is ignorance being perpetuated. 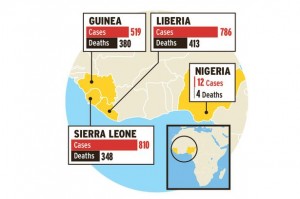 Peace Corps is still operating in countries like Togo and Ghana. As previously alluded to in this post, Peace Corps Washington puts volunteer safety above anything else. Consequently if they felt the risk was too high for Americans serving in West Africa they would be immediately pulled out. . Rationality, fortunately, has been maintained for the time being and service continues unabated for those volunteers. Peace Corps programs in Liberia, Sierra Leone, and Guinea have been suspended until the outbreak can be contained However, when I read about politicians promoting paranoia by calling for travel bans from Africa, it makes little to no sense. Should we really prohibit some of the best doctors and nurses in the world travel to the area that needs it the very most? I’ve been living in a country for 16 months where HIV has a 23.7% infection rate among the population. The virus is transmitted in the same manner as Ebola, so should I be allowed back into the states?

As with any epidemic throughout history, the poor take the brunt of the casualties while the affluent- in this case the nation of America- will develop cures and protocols for containment once it has breached its institutions. This particular epidemic will not go away, in fact it has persisted since the virus was first discovered in the 1970s. Unless of course the poor developing nations are provided assistance from a consortium of nations with the resources to combat the problem. This is a challenge for humanity. The Ebola virus doesn’t recognize the imaginary lines our species has drawn across the planet. There is no sense in finger pointing, political posturing, or paranoia. We have the scientific capabilities to address this problem at the epicenter. Now is the time for rational action.