Greetings from the Mountain Kingdom,

The pen-pal letters have arrived and so has the end of the rainy season. The first exchange between Form E students at Thaba Tseka High school and World Cultures students at Maine West High School has been completed to the delight of everyone involved. The monsoon season subsided but not before stranding a few others and myself. The solution was communally inspired and created quite a memorable experience.

The eagerly anticipated letters from World Cultures students at Maine West High School arrived on March 17th and I couldn’t have been more thrilled to disseminate them amongst the 100 Form E (Grade 12) students. The excitement was shared by the students as well; the announcement was met with joyous applause and banter. The teacher and former colleague I’m working with on the project also included some candy in the package. Fruit-flavored Tootsie Rolls to be specific. The students happily accepted the letter and a piece of American candy as I jotted their names down on the pairing sheet. I also handed them the instructions to the correspondence reply, of which I derived from the Maine West teacher’s handout:

At this point the only thing left to do was wait for the replies. I gave my students a week to craft their responses but soon realized they would need some extra time as it became clear that they were putting a lot of effort and creativity into their work.  Per the instructions, the American letters contained some sort of artifact included with each letter; such as a coin, candy wrapper, or photographs. My students desired to reply in kind so it was very interesting to see what they came up with. Each and every letter is a work of art in its own right. Which is exactly what we were hoping to inspire. Have a look at a few:
– – http://imgur.com/a/QWW39

Moving forward with this correspondence project is going to be great. I informed my students that after a few back-and-forth replies, the plan is to have them all make email accounts and continue their exchange via modern means (ie. the internet). I figure that’s the best way to tie it into the Computer Studies curriculum and also an effective method to compare and contrast communication methods of old and new.

On a side note, we’re well within the second unit and the syllabus I’ve been developing is starting to take a nice shape. Depending on how it shakes out, I might submit the final copy to the Ministry of Education in November to see if some of the content can be put into the official government technology literacy curriculum, which happens to be from 2005 and is very outdated. Below is the working draft:

The 16th started out like any other Sunday. The town was quiet as most people attended their respective church and accompanying 4-hour masses. Liverpool was playing Manchester United in the afternoon, so I decided to tag along with a local friend while he did some surveying for the electric company in the morning to pass time. With him being an engineer and knowing good English, I’ve taken quite an interest in his work around the camptown and we’ve naturally became close friends.

Monsoon season (as I call it) was just ending. I would estimate that in the month of February, it rained for 25 of the 28 days. This pattern of daily rain continued into mid-March. As a result, the rivers were flowing rapidly and ground was heavily soaked. The gravel road we were on ended and from began a dirt road. For all intents and purposes.. best we call it a mud road. The key was navigating around the deep mud; to which he was successful for a brief period. The luck ran out and we soon found ourselves immobilized in 12-inch mud. 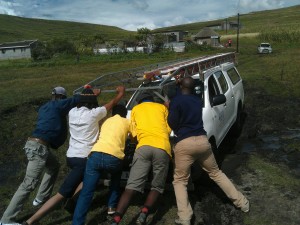 So here we have a problem that is sometimes encountered in the United States- usually with snow where I’m from. The options to resolve a stuck car situation are numerous in most cases. This wasn’t the first car quandary I’ve witnessed here in Lesotho. They tend to occur more often for various reasons. However, what really enthralls me is the fascinating perspective gained by observing how a different culture handles a familiar problem. The first thing we tried to do is toss some rocks in front of the tires in an attempt to gain some traction. The worldwide go-to first attempt for dislodging a stuck car wasn’t working for us on this day. He then phoned a friend who also owned a pickup truck. The plan was to have him tow ours out with a rope. As we waited for his arrival, random townspeople from the immediate area began showing up.  Before long, there were at least 15 men standing around the vehicle analyzing the situation and discussing possible solutions. There was even a teenage boy who offered up a suggestion to the approval of Bo_N’tate. I found all of this to be very captivating. 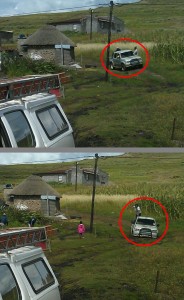 After about 20 minutes, the friend with the truck could be seen arriving in the distance- reggae music blaring and a few extra guys in the flatbed. As he approached my friend yelled to him to avoid a certain patch of mud but the message was ignored or never received. He drove straight into what could only be described as quicksand and his truck quickly descended to the axels in a giant mud patch. I felt the urge to burst out in laughter since I knew this goofy Rastaman from around town. Not surprisingly, the rest of the townspeople began laughing at the sudden unexpected misfortune and irony. There wasn’t a single bit of negativity or distress among everyone involved. Joking and laughing prevailed even as it became apparent getting these two trucks out wasn’t going to be an easily achieved task.

Eventually my buddy decided to call “the big truck” which is owned by the electric company. He was trying to avoid this since it was Sunday and none of his colleagues were on the clock. However, he had no choice at this point and so began the 2nd wait for assistance. Eventually we could hear it roaring up the hill from behind us and I screamed out “The cavalry has arrived!”. Unfortunately the reference was lost among this particular group. Seeing the vintage Mercedes beast pull up was a great sight. One could really appreciate the ingenuity put into this legacy machine which has stood the test of time. It made easy doings of the two trucks. We ended up catching the Liverpool game and celebrated the accomplishments over lunch and a cold one. What began as an average Sunday ended up much like one. Except on this Sunday I witnessed a collective gathering to resolve a familiar problem… and that experience alone is one for the memories. 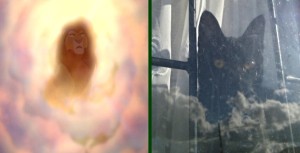