Greetings my family, friends, and subscribers,

I had originally decided to dedicate April’s post to describing the life of your average rural Mosotho. However, due to a recent safety incident I’m going to cut it short for May’s post which will describe the aforementioned event in comprehensive detail.

The month of April was a relatively uneventful compared to others. Easter break provided some time to travel about the area before winter came in with full force. It seems as though there are only 2 seasons here: summer and winter. Moreover, the transformation is usually overnight which provides an unwelcomed morning surprise in my drafty house.

The 3rd goal of the Peace Corps as laid out by Kennedy is to “help promote a better understanding of other peoples on the part of Americans”. This blog is the 3rd goal in a nutshell, but I’ve put a strong emphasis on describing the day-to-day life as a foreign aid-worker as opposed to the overall scope on the perspective of life in the region. I must note that most of the following is anecdotal and should not be perceived as a broad stroke of the Basotho nation. Indeed there are many positives to highlight, but like everywhere in this world, there are dark aspects that really plague the nation.

The unemployment rate here is astronomical. 45% according to the CIA World Factbook. I often find myself wondering how some of the commoners I meet in the village survive; especially those who hang around the bars 7 days a week. A stroll through town will yield countless greetings and general friendliness. Street vendors line the side of the road- selling fruit, vegetables, or random accessories such as combs, matches, or knit hats. The profit margins of these vendors are so small; it’s almost inconceivable to imagine how they can afford to eat without some other supplemental income. Wikipedia states the average income for a Mosotho is $1.75/day. I would estimate that it’s a bit higher, at least in the camptowns. But not by much. I would guess most of the vendors net about $5/day. As for those who don’t work, they are dependent on odd-jobs and the kinship of family. A good portion of the laborers are shepherds, also known as “herd-boys”. They tend to the livestock from dusk till dawn, also for very little compensation. These are the most traditional Basotho here, always wearing a fashioned Kobo (blanket), signature rubber boots, and carrying a custom designed molamo (herding staff). It’s quite a sight  to see them walking around town in contrast with modern dressing Basotho. Another big source of employment is by government ministries and agencies. Nationally, the government employs 20% of the population. More about this in a future post.

Being approached by children is common. 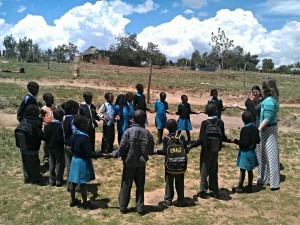 They usually say “Hai!” and ask politely for money or candy. At least that was the case for the first 6 months. The association of candy with white people is common across Africa due to the missionaries using it as a sign of affinity with the locals they were preaching to. Each time I made it clear to the children that I have no money (it’s true- I’m a volunteer) and that if they want candy they must work for it. Now they don’t bother to ask for such things, but rather approach me to practice the English they’ve learned in school that week. I consider this a social success.

The more affluent Basotho are obviously the minority. To have a car is to be rich here. 99% of them can give you their rags-to-riches story- each one more remarkable then the last. A good example would be a very close friend of mine who works as an engineer for the national electric company. As the oldest orphan with 4 siblings, he practically raised a family starting at the age of 15. Now he owns a car, is putting his wife through nursing school, and has a toddler son attending one of the better schools in the area. By American standards he would be just above the poverty line based on his income. A more educated populace is emerging, and Lesotho could very well be pegged as a success story among so many failed African states in the next 25 years. The adult literacy rate is 82%, the highest in sub-Saharan Africa- another sign of vast improvement.

Like every single developing nation, corruption is rampant here. There are plenty of well-intended social services but a good majority of them are crippled due to mismanagement or outright theft of funds. The people are well aware of this, but it’s very difficult to be involved in the political process if you’re daily goal is to put food on the table. To make matters worse, the HIV epidemic plays the most detrimental role in this society. With so many widows, widowers, and orphans, it’s a painful thought to realize there isn’t much that can be done over the short term to end this suffering. My sole personal goal is to develop capacity building among those I work with, mainly the youth. While my colleagues focus on HIV prevention education on the grassroots level–which I respect and admire–I decided my strengths are better put to use in the economic and employability sense. Both are strongly correlated. Build a successful and educated society, and the epidemic will naturally fade. The statistics prove that prosperity equates to an educated demographic which results in a better livelihood.

I plan to scribe a comprehensive post as my service is winding down. What I’ve written here is only the tip of the iceberg. There is so much to be told about this amazing culture and the history of the Basotho nation and its place in sub-Saharan culture. 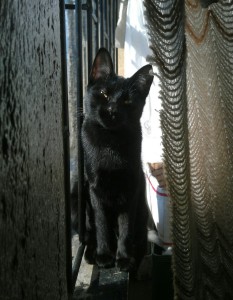